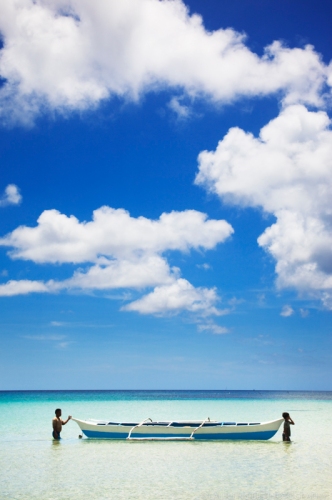 I am stranded in the small town of El Nido on Palawan Island in the Philippines.  A week or so ago, during a night spent on a supposedly deserted island in the remotest part of the world I have visited, all my camera equipment and money was stolen – but that’s another story.  At least I have the good fortune of a loan of my travel companion’s camera to complete my shoot.

I am being looked after by the company on whose tour the incident occurred and am becoming friends with many of their staff.  I say “friends” – they erupt into cackles of laughter every time I see them and the ladies imply varying degrees of romantic intention.  Each day in the tour company restaurant, where I now have a tab, a particularly vociferous and heavily pregnant lady saunters over to me, and plonks herself down by my side.  She rubs her belly whilst looking up at me wistfully, before proudly announcing I am the father … hysteria.  The daily repetition of this process seems only to enhance the degree of the mirth.

During yet another rerun of this frivolity, the Filipino lady in charge of the El Nido operation, Romelyn, interrupts and invites me and two friends to a fiesta taking place that night, on a remote, local island.  It is definitely a once in a lifetime opportunity and we hastily agree.  In the evening light, we gather on the beach: me, Johnny, Naomi and far, far too many Filipinos for the small bangka boat awaiting us.

We push the dangerously overladen boat, eventually the sand releases its grip and the boat wobbles off, towards a myriad of tiny lights on the horizon. I grip my camera – well, the borrowed camera – close to my chest, as the boat passes through the surf.  The warm evening air passes over us, cooling and warm at the same time, the most perfect temperature.  The lights reveal themselves to be a fleet of tiny squid-fishing boats, each holding a fisherman and a lamp, which is attached to the end of a stick and suspended over the water.  There are so many: we are drifting through a galaxy on the South China Sea.  I am transfixed as if in a dream, unlike the teenage Filipino girl in front of me who hasn’t looked up from her phone in over an hour.

We arrive at Diapila after what seems like hours.  Romelyn leads us to her friend’s house, which is more substantial than most of the local fisherman’s shacks.  We are given beer and led to the karaoke machine, the national obsession.  Let’s just say it’s not my thing but Johnny, a Canadian fireman, seems very keen.  The song selection isn’t vast but Johnny’s eyes light up and it becomes apparent that he is very familiar with one of the tracks, “Yo VIP, Let’s Kick It….Ice Ice Baby.” It is a faultless rendition and one that reeks of many long hours in front of his mirror.

A few beers later, we head over the sand toward the sound of music.  Palm leaves and the woven roofs of the houses compete to reflect the moonlight.  I notice bunting, made of coloured plastic bags tied to string, hanging between the houses.  The hubbub of the fiesta is quite deafening.  There are a lot of very drunk people; the Tanduay is flowing freely tonight.  The main focus appears to be a pageant, which we gaze at, I for one never really understanding what is going on.  In the middle of the plaza, young girls are dancing far too erotically for their age and the same song seems to be on a loop.  The music stops momentarily for a judging panel and I think the aim … no, I don’t know what the aim is … and the same song starts again.

Being foreign and far taller than anyone else, I am the centre of attention.  I decide it is best to take part and join one of many gambling tables.  I am not sure I comprehend the rules, plus I am now very happy, but the game seems to consist of dropping a ping pong ball on to a grid of black and white squares and shouting “DOOBLAR” at the top of your voice.  I bet repeatedly on white and win repeatedly.  I am taking money from people far poorer than me.  I feel guilty but I know they would never accept it back … besides, I have recently pumped eleven thousand pounds worth of camera equipment into the local economy.

The next morning dawns perfect blue.  Naomi, Johnny and I explore the beach.  Cumulus clouds drift over the ocean.  We watch a bangka skate across the surface of the incandescent sea.  As the day rolls on, we find ourselves amongst ever-growing crowds and in ever-growing heat.  The crowds fix their eyes on the shore as teams of men wade waist-deep and stand behind their bangkas, rocking them back and forth, bobsleigh style, to the countdown, before propelling them forwards.  The engine kicks in and a high-speed figure of eight course ensues at a great rate of knots, and to a great amount of cheering.

The Shot: I patrol the shore looking for shots, the main difficulty being not passing out or getting dangerously burnt in the heat.  I make friends with varying groups of spectators and do my best to cover this very unfamiliar sporting event.  I take a few nice shots and decide I need to escape the heat.  As the event draws to a close, we start towards the main house.  I glance out to sea and notice this bangka being walked to its mooring by what I imagine are father and son.